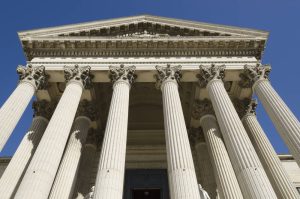 The Racketeer Influenced and Corrupt Organizations Act, or RICO, was initially written to catch Mafia dons and cocaine kingpins, people who gave vague orders to nameless minions and then collected the unmarked profits. Today, anyone involved in activities classified as “racketeering” can fall into the RICO net. For instance, CEOs, trustees, political leaders, and controlling shareholders have all been charged under RICO.

Once a RICO conviction has been handed down, the appeals process is both lengthy and swift. It can take years to grind through an appeal, but the deadline for filing is short. If you have been convicted of a RICO offense, you need an attorney who specializes in federal appeals. Contact Hart Powell, S.C. at (414) 271-9595 immediately to discuss how our seasoned team can help. This is one instance where you have no time to waste. You need legal services before the clock runs out.

RICO is the shorthand name for 18 U.S.C. 1961. This law targets individuals who commit a wide range of “white collar” crimes, including gambling, extortion, kidnapping, theft, embezzlement, fraud, money laundering, human trafficking, and conspiracy. RICO does not prosecute these crimes themselves but uses the crimes as links to the larger crime of racketeering.

Many people may believe that the RICO Act doesn’t apply to them. However, as an example, hosting an illegal poker game in your garage is a crime. If you and two other buddies host an illegal poker game, charge an admission fee, and then split the minimal profits to buy cigars for the next game, you’ve entered the world of racketeering. If you are arrested for running an illegal gambling ring, the gambling will be used as evidence of racketeering, not as a crime in itself.

Because RICO initially targeted criminals at the top of the racketeering heap—cocaine cowboys and Godfathers—the charges are broad, and the penalties are severe. Any two acts of racketeering in a ten-year period are sufficient to catch a RICO charge. The resulting penalties could include a 20-year prison sentence and a $25,000 fine. Worse, RICO allows for pre-trial asset forfeiture, meaning the government can seize all your assets and hold them until your trial. The government is supposed to give seized items back if you’re found not guilty.

If you’ve been found guilty of a RICO charge, you only have 30 days to file a Notice of Appeal. This inflexible deadline is the difference between losing all your assets and spending the next ten years in prison or possibly going free. Ideally, you should file this Notice of Appeal the same day or the day after a conviction is handed down.

It’s important to note that not all attorneys are qualified to file federal appeals. An appeal is not “retrying the case,” as some laypeople believe. Appealing your case involves a lengthy and in-depth review to see if any legal or procedural errors were made and if any of them give grounds to reverse the decision or remand the case for another trial.

Under U.S. law, evidence must be obtained in accordance with your 4th Amendment rights, or else it will be barred from use in court. Any confessions must be given freely and voluntarily with full knowledge of the possible outcomes. Despite how TV shows or movies depict these dynamics, specific protocols must be followed for evidence to be admissible in the case.

There are other things that happen in court that take a skilled attorney to spot. Attorneys read through transcripts and court documents to find mistakes that sometimes slip past the judge and jury. In one case in Ohio in 2018, a RICO case was partially reversed because the lower court mistakenly believed the defendant was a union official. This error improperly added several years to his sentence. In the same case, a single conspiracy count was incorrectly counted as two conspiracy counts to garner two convictions. One conviction was removed.

Once a case is on appeal, the process slows down. After the 30-day deadline for your Notice of Appeal passes, deadlines are measured in months, not days, and continuances are common. The good news is that there are fewer hearings and court appearances. Unfortunately, you may start serving your sentence unless you are put under house arrest or probation pending appeal. Obtaining counsel and getting your appeal started at once is essential when attempting to limit prison time if not forgo prison time entirely.

How We Can Help

Notably, filing a federal appeal is not something that every attorney can do. Even a talented criminal attorney cannot always appeal at the state level. The skills and knowledge needed for a federal appeal are much harder to develop. However, the knowledgeable and skilled legal team at Hart Powell, S.C. is here to help.

If your own attorney can file the Notice of Appeal, they should do so during the limited appeal timeframe. However, after that, you need the services of Hart Powell, S.C.. Our attorneys and our legal team know the details to look for in the transcripts and court records that can help win your appeal. We know where to look if someone made errors in handling your case or overzealous prosecutors cut corners. We will also apply legal theories to your case to see if they can help with the appeals decision.

A RICO charge can be overwhelming. A conviction can seem like the end of the world. Don’t despair. Our seasoned attorneys can help you navigate these complex processes. Call Hart Powell, S.C. at (414) 271-9595 immediately, and let us get to work on appealing your case. We will fight for your rights and freedom as long as it takes. Reach out for a free and confidential consultation today.