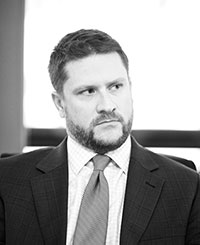 Geoffrey Misfeldt has earned a reputation as a fighter on the toughest of cases. For more than a decade, he has focused his practice in defending those accused of crimes, guiding his clients past their challenges, and fully preparing them for success in the courtroom or obtaining the best negotiated results before trial.

Wherever you are in the State and whether you are under investigation, charged with a crime, or you have already been convicted, Geoffrey is here to help guide you through your difficult situation. He has achieved positive outcomes for clients all across Wisconsin, from Hudson to Kenosha and from Marinette to Madison; in federal court, in state court, and on appeal, where he has argued complex issues before the Supreme Court of Wisconsin and the Seventh Circuit Court of Appeals.

If there is an issue in criminal law, chances are that Geoffrey has seen it. He is called upon by other lawyers and judges to handle difficult defense work and he has presented to other lawyers throughout Wisconsin on criminal justice issues. Geoffrey is qualified, experienced, and able to handle the complexities of state and federal prosecutions to best fight for your freedom.

Geoffrey’s efforts on behalf of his clients have earned him accolades from other lawyers, who have him named among the top 2.5% of young lawyers in the State for the last seven years. An out-of-state criminal defense attorney entrusted Geoffrey to represent a family friend in a difficult situation and when the battle was over, the attorney wrote: “As a guy who has done criminal defense for 25 years, I know I recognize a job well done when I see it. You knocked it out of the park for a family that I care deeply about.” Geoffrey’s tenacious and client-focused work has also won him the respect of judges throughout the State. As one example, after a long and uphill fight in a sexual assault case in northern Wisconsin, Geoffrey obtained a very favorable outcome for his client. At the end of the case, the Judge had this to say for the record: “The last thing. Mr. Misfeldt, I don’t think I’ve had a case with you before. You did a really good job representing your client. I know there was some conflict with us at times, and I thought it was a healthy and respectful conflict. I was impressed with how you represented your client. I wish everybody had representation like that.”

Please see our results page for more information about the successes Geoffrey has obtained for our clients, but please also remember that we cannot publish everything. Often times, our best results are the ones no one other than our client will ever know about.