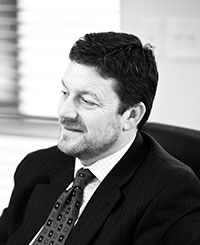 Since joining the firm of Hart Powell, S.C. in May 2013, Dan has obtained successful results in several state and federal felony cases, including homicides, armed robberies, sexual assaults, drug trafficking, and white collar cases. He has extensive experience in complex criminal pre-trial litigation and procedures, trial advocacy, and sentencing issues.

Prior to joining the firm, Dan was a federal criminal prosecutor in the Eastern District of Wisconsin for 14 ½ years. As a federal prosecutor, Dan investigated and prosecuted a wide variety of federal crimes, including organized crime, public corruption, fraud, money laundering, RICO, immigration fraud, war crimes, drug trafficking, bank robbery, rape, kidnaping, and homicide. Many of Dan’s federal cases required the use and analysis of complex financial documents, wiretaps, and other electronic surveillance. Dan was the lead counsel in dozens of federal and state jury trials with conviction rate over 95%. He has also argued numerous cases before the 7th Circuit Court of Appeals.

During part of his tenure as a federal prosecutor in the Eastern District of Wisconsin, Dan was the Lead Attorney for the Organized Crime Drug Enforcement Task Force (OCDETF) and the Narcotics Chief who supervised the investigation and prosecution of all federal narcotics-related crimes in the district.

Dan also worked on several immigration fraud cases in close coordination with the Human Rights Violators & War Crimes Unit of ICE, the International Criminal Tribunal for the former Yugoslavia (ICTY), and the Special Department for War Crimes of The Prosecutor’s Office of Bosnia and Herzegovina (BiH). These cases involved U.S. immigration violations by individuals suspected of committing war crimes in the Balkans during the early to mid-1990s.

Dan is licensed to practice before Wisconsin State and Federal District Courts, as well as the Seventh Circuit Court of Appeals and Ohio State Courts.

Dan’s professional accomplishments include being named to the Top 100 Trial Lawyers list by the National Trial Lawyers for 2014, the Wisconsin Association of Homicide Investigators Meritorious Service Award in 2010, the Director’s Award for Superior Performance as an Assistant U.S. Attorney in 2008, and the Department of Justice Seal from U.S. Attorney General Janet Reno for prosecution of the Short North Posse in 1996.