Can a School Fight Be Prosecuted? 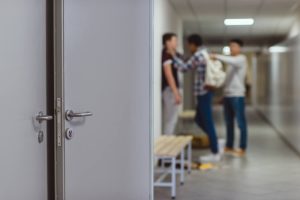 This past May, a 12-year-old in Kenosha was charged with disorderly conduct after allegedly being involved in a school fight at her middle school. According to a CNN account, the girl was captured on video fighting another girl. An off-duty police officer attempted to break up the altercation.

The story gets more complicated, as the video shows the officer putting his knee on the girl’s neck to try to subdue her. She was eventually handcuffed, picked up, and removed from the scene. The family’s attorney maintained the girl was innocent — but the story is just one example of how the legal system is stepping in when violence happens in school. Depending on the state and the circumstances, a school fight can be prosecuted.

Indeed, as an Education Week article from November 2021 noted, there might be more occasion to involve the criminal justice system in fights at schools. The article mentions a substantial number of “anecdotal reports” pointing to a rise in violence in K-12 schools.

Though the article couldn’t collect data more recent than 2017-18, their information shows that violent incidents in schools are on the upswing. It reported that “teachers are reporting breaking up fights in schools and are raising concerns about their own safety.” It also listed a number of incidents where school fights resulted in arrests.

In Wisconsin law, the battery statutes include a specific section on people employed by schools, making it a Class I felony if anyone “intentionally causes bodily harm to a technical college district or school district officer or employee acting in that capacity.”

That would apply to teachers and security officers who might be caught in the line of fire while trying to break up fights. Although this law wouldn’t technically apply to the students fighting each other, standard battery laws could certainly apply to fighting students.

In addition to a whole section of Wisconsin law governing what happens in school with respect to suspensions and expulsions, there’s also the question of whether a prosecutor might want to move forward with trying cases when a school fight leads to arrests. The next determination would be whether the students are to be tried as adults or in the juvenile justice system based on their ages.

What to Do if There’s a Fight at School 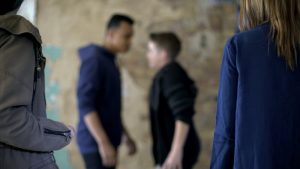 The Empowering Parents website has some suggestions for parents who learn that their child has been in a fight at school. Those suggestions include:

Of course, if your child has been arrested and there’s a threat of prosecution, there’s another conversation to be had with a lawyer. But even there, getting as much info as you can from your child about the fight might help the lawyer in building a defense for them.

Even if There’s a Conviction

Wisconsin law has a provision that allows for a person’s record to be expunged of crimes committed before the person reaches age 25, such as those that might result from a school fight. Should the crime rise to a level of a Class H or Class I felony, it’s not eligible for expunction. In the case of the girl in Kenosha being charged with disorderly conduct, should that case result in a conviction, it could be eligible.

Whether your child is facing charges from a school fight or you’re looking to clear your child’s record after a conviction, reach out to the Milwaukee criminal defense lawyers of Hart Powell, S.C. at (414) 271-9595 to get started. It’s definitely more dangerous in our nation’s schools these days, and there’s reason to be concerned about that as a parent. But should you need a lawyer’s assistance after your child was arrested or charged after a school fight, Hart Powell, S.C. can provide you with the defense you need.